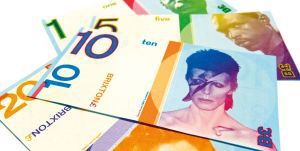 Last week the Bank of England published an article in its Quarterly Bulletin, accompanied by a video clarifying what they regard as the legal status of local currencies, and the issues they raise for the bank.  It marks a significant moment in the evolution of local currencies.  It is also quite possibly the first official Bank of England document to contain the term “local mutiplier effect”, which is cause for celebration in itself.  It also finally sets down in print what the Bank regards as being the legal status of the Bristol Pound, the Brixton Pound, and the other local currencies either in existence, or in the planning stages.

Entitled Banknotes, local currencies and central bank objectives, the article is written by Nona Nagvi and James Southgate of the Bank’s Notes Division.  In this short video, Nagvi summarises the article:

For starters, it clears up once and for all what exactly the legal status of local currencies is.  They are stated as having:

“a similar legal status to vouchers”.

“The legal status of a voucher is different from that of a banknote, as vouchers represent a pre-payment for goods or services from a specified supplier (or group of suppliers) and does not legally entitle the holder with the right to redeem the voucher.  While local currencies may have more functions than a traditional retail voucher, they do not have the full functionality of a banknote”.

The report is the result of a series of meetings between the Bank of England and New Economics Foundation and representatives of various local currency schemes.  Historically, when local currency schemes, such as the Austrian Worgl, prospered and boomed, national government and the central banks closed them down, fearing a negative impact on the national economy.  Part of the reason for the dialogue that led to this report was wanting to avoid a repetion of such a thing in the future. 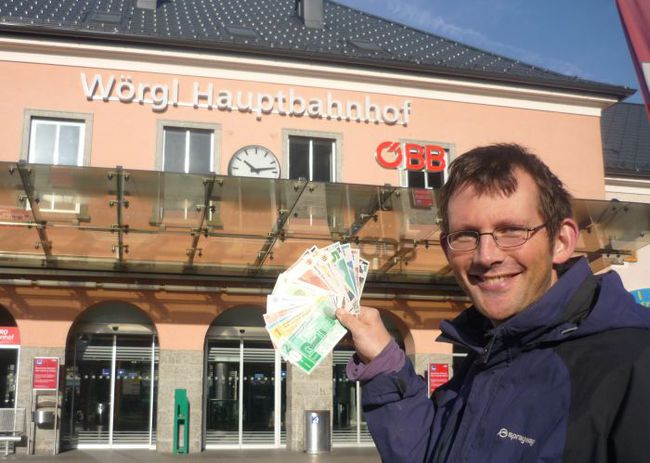 The author displaying his collection of local currency notes outside Worgl train station in 2009.

Tony Greenham of nef told me:

“It was very encouraging because they engaged in a very open-minded way.  The sense was that they wanted to really understand local currency schemes now and identify appropriate ways to regulate them.  I think it would be fair to say that they start out sceptical, seeing them as being potentially an obstacle to efficiency, and ended up being able to see the beneficial impact that well-run schemes can have”.

One interesting aspect of the report is that it was written by the Notes Division, rather than a department with a broader remit around economic policy, as a result of which much of the report is focused on the printed notes.  However, such schemes, in particular the Bristol Pound and the Brixton Pound, now make use of innovative Pay-by-Text schemes, which are mentioned in the report only in passing.  Odd also, given the relatively small amount of sterling notes used these days in comparison online payments, credit cards and so on.

The hope for this report, according to Greenham, was to nudge the Bank towards the kind of shift that is happening in Brazil. There, community banks are making microcredit loans to poor communities in the favelas with a proportion of the loan in local currency, as a way of stimulating and supporting local economic development.  The first bank to take this approach was Banco Palmas.  Initially national government tried to close this down, but they have since had a major turnaround on the issue and have now introduced a regulatory regime for it and actively support it.  Although the Bank of England report is seen as just a first step, it is the hope that the Bank of England may, over time, also move to such a position. 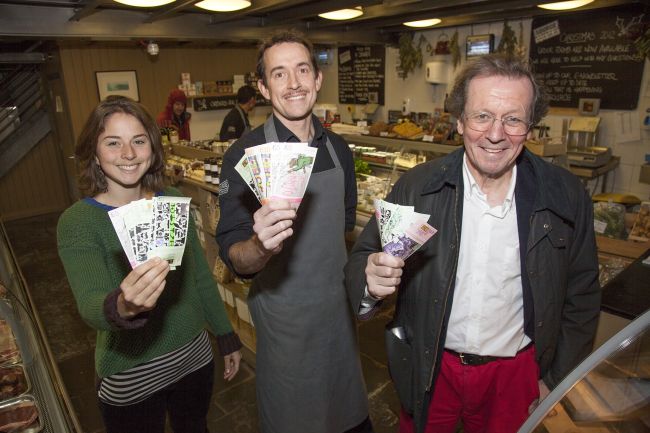 With a number of new places, such as Oxford, Kingston and Crystal Palace poised to follow suit, what concerns remain if these schemes continue to grow and really take off?  The Bank is clear that its main objective is “the need to maintain confidence in the physical currency (sterling)”.  It states that at the moment all the schemes are relatively small, which is captured in the rather amusing table below (we’ve a way to go yet people): 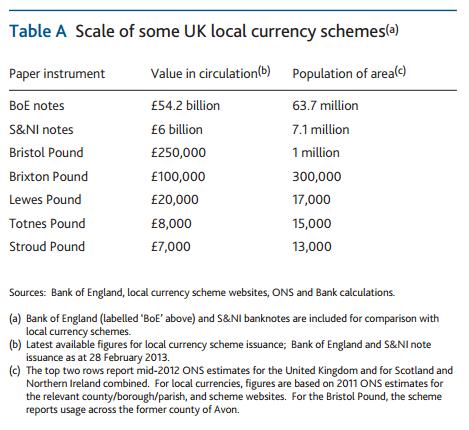 From this, they conclude that:

“The size, structure and backing arrangement of existing schemes mean that local currencies are unlikely to pose a risk to the Bank’s monetary financial stability objectives”.

They do, however, outline a few of their potential concerns.  The first is that fears surrounding the authenticity of local currency notes could “spill over to reduce confidence in (the Bank of England’s) banknotes”, although they note that the level of attention paid to design and security features make them distinctly different from sterling and hard to forge.  They write:

“One concern is whether a successful counterfeit attack on a local currency voucher scheme might generate a spillover effect that reduces confidence in other physical instruments, like banknotes”.

At the moment, the schemes are small enough, and the notes sufficiently recognisable and distinct from legal tender that it’s not seen to be much of an issue.  That distinct difference is summed up when they write:

“their (local currency notes) design must differ from Bank of England and S&NI (Scotland & Northern Ireland) banknotes to avoid breaching the Forgery and Counterfitting Act 1981”.

The second is a reasonable fear that a very large local currency scheme could fail, and if people were dependent on it as a payment system it could “lead to a reduction in access to payment services”.  It hypothesises that if one such scheme collapsed it could “trigger a run on others”.  For now though, the Bank is sufficiently confident that the one-for-one backing of these schemes with sterling, in part at least, mitigates the risk. 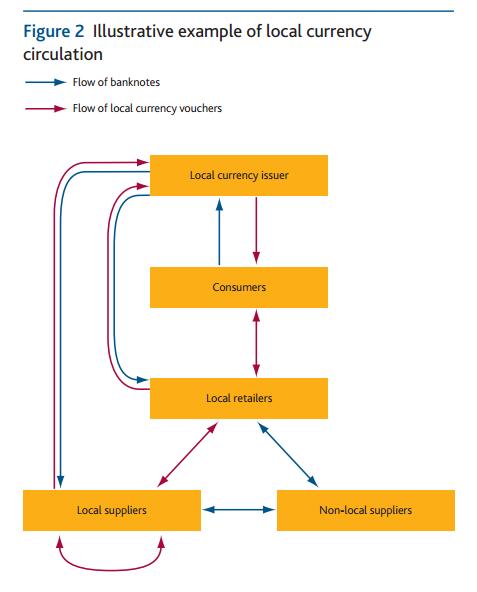 Useful diagram from the report distinguishing the difference between how local and national currencies circulate.

It also notes that “users do not benefit from the same level of protection as banknote holders”.  This is true.  If, say, the Bristol Pound, were spectacularly badly run and spent the money that currently backs it, people would be unable to redeem their notes for sterling if they wanted to.  The Bank’s concern is that in such circumstances people might turn to the Bank with “an incorrect expectation of recompense from the Bank in the event of a scheme failure”.  It suggests that local currency schemes make this clear in their terms and conditions.  They have also, in a set of Frequently Asked Questions on their website, set out their position on this.

The Bank still has a way to go in its understanding of local currencies.  Some aspects of it is really doesn’t get.  They write:

In principle, local currencies could affect the stance of monetary policy if the aggregate amount of spending in the economy, and hence pressure on the price level as captured by the consumer prices index, is affected as a result of the schemes. This could arise, for instance, if the net impact of local multiplier effects were to significantly boost economic activity; or, on the other hand, if the reduced trade with non-local suppliers were to make scheme participants less competitive, resulting in significantly lower levels of economic activity at the macroeconomic level. 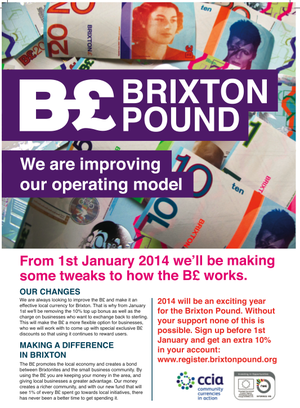 But the point of local currencies isn’t that they will feverishly increase economic activity and push up inflation.  They are generally introduced in order to increase local production, and to enable the utilisation of local resources that sterling isn’t so effective at enabling.  It also is concerned about efficiency, that local producers are not as effective as large scale producers.  But the whole thinking that underpins local currencies is that one of the key reasons that a large retailer like Amazon is more ‘efficient’ is because its environmental and social costs are excluded, whereas in the local economy that is far less likely to be the case.

The report offers a fascinating and very useful overview of local currencies.  If I were to take the liberty of summarising it, I would say that it offers a somewhat nervous support for the notion of local currencies, acknowledges that at the moment it’s all a bit hypothetical given the size of the schemes, and raises a few valid, but rather far-fetched concerns which either just aren’t going to happen or are based on a misunderstanding of the process of intentional localisation.

For Tony Greenham, this report is “a very positive thing which the Bank approached with an open mind.  I’m pretty pleased with it, although I would argue that the Bank has yet to really grasp the positive potential of local currencies”.  It is certainly a fascinating piece of work.  Personally, I look forward to its third or fourth iteration when local currencies have become much more widespread and mainstream, and by which time the Bank of England will be thrilled and delighted with their potential, as we can see today in Brazil.