A Morning with Matisse with Mandy’s Make

The Miracle of Wörgl

Researched and written by Chris Parsons.

“It softens suffering’s dread; it offers work and bread” Once upon a time, in a land far, far away which we shall call Austria, dear reader, there was a small town known as Wörgl. And Wörgl was a place that seemed to hesitate. For whilst the Tyrolean mountains hoisted themselves though the clouds on all sides, as if aspiring to greater heights might bring the sun closer and transform their snowy white peaks to flower-laden meadows, Wörgl stayed low where it was, too shy and timid to really stand out.

And it was a bad time for the good people of Wörgl. It was the 1930s, a decade when a Great Depression struck down all those who spoke the name of Black Tuesday, the fiercest plague that ever did rise up from the West. Wörgl was a town of industry, its workers forming mighty concrete slabs to construct the future wonders of the 20th Century for all to behold. Or so they thought. But none were spared the Great Depression and the squealing rusty gates of the factory squealed shut for their final time and the men had no other place to turn.

More than one in ten could find no work. Hundreds of families possessed not a penny between them. The town’s taxes went unpaid, its debts mounted and the assets of the local co-op bank were frozen as though caught in the starriest winter Alpine night.

Storytellers bicker over whether the men of the Viennese banks took the form of panicked deer, cackling hyena or idol sloth, but all concur they did nothing to help. Loan interest rates inflated in the manner of a deadly hydrogen zeppelin whilst the amount of circulating money shrank like the denim of Mr Strauss’ very first stonewash. Wörgl needed a miracle worker and he arrived at Christmas, a gift-wrapped portent from above. Precisely 622 metres above in fact, from nearby, more elevated Hopfgarten, and his name was Herr Michael Unterguggenberger. In December 1931, the Herr became Mayor and he looked out at a town in crisis. There was no money, no work and an infrastructure crumbling like thin fresh pastry on a home-made Apfelstrudel.

But the Mayor was no charlatan and had concluded all his economics homework with scholarly diligence. He knew he had nothing to lose. He took the town’s remaining few Schillings, lodged them in a bank as security and made his own money. Soon he began to pay half the salaries of his devoted council workers in his own currency, which all the local businesses were ready to accept.

But here’s where the Mayor’s cunning kicked in: whoever was found to be in possession of his notes at the end of the month required a stamp to keep the cash valid, and the stamp cost 1% of the note’s value. At a time of scarcity, nobody wanted to pay the 1%. And whilst they were also free to change the money back into Schillings, the people of Wörgl were even less inclined to pay that 2% fee.

The Mayor was elated. His new money circulated over one hundred times faster than the Schilling and created greater than twelve times more employment than the equivalent amount of national currency. It was the Great Depression and yet the Mayor’s money meant Wörgl built roads, bridges and municipal buildings for all to see yet avoided increasing any prices.

The Mayor’s success was eyed enviously by towns both near and far and soon hundreds wanted to copy his ideas. European ministers and famous American economists came to witness the miracle with their own eyes. A forum was held for the Mayor to share his secrets with other towns ready to follow his lead. Wörgl’s time had come. It no longer hesitated and was neither shy nor timid. Wörgl grew into a beautiful swan for all to admire and everyone there lived happily ever after thanks to the Mayor’s miracle. The End.

The twist in the tale

Except, that’s not how this particular fairytale did end, dear reader. I regret to reveal that the fabulous experiment in Wörgl gave those Viennese bankers a terrible fright and the Austrian Central Bank re-asserted its legal monopoly to issue money, which our heroic town fought valiantly in the courts to overturn without success. So the Mayor’s money was taken away just one year after it was first issued and Wörgl once again found itself in the grip of a Great Depression, with rising unemployment and a stalling economy. And the moral of our tragic tale? Perhaps it’s that centralised money doesn’t give us all the answers after all? Now, if they’d just had enough time to set up a sexy scheme like Bristol Pound… 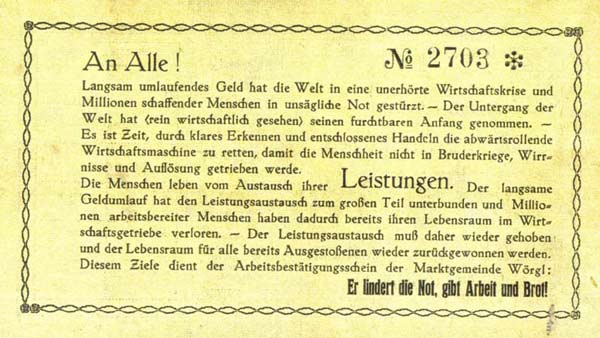 “To all whom it may concern! Sluggishly circulating money has provoked an unprecedented trade depression and plunged millions into utter misery. Economically considered, the destruction of the world has started. – It is time, through determined and intelligent action, to endeavour to arrest the downward plunge of the trade machine and thereby to save mankind from fratricidal wars, chaos, and dissolution. Human beings live by exchanging their services. Sluggish circulation has largely stopped this exchange and thrown millions of willing workers out of employment. – We must therefore revive this exchange of services and by its means bring the unemployed back to the ranks of the producers. Such is the object of the labour certificate issued by the market town of Wörgl: it softens suffering’s dread; it offers work and bread.”

This website uses cookies to improve your experience while you navigate through the website. Out of these cookies, the cookies that are categorized as necessary are stored on your browser as they are essential for the working of basic functionalities of the website. We also use third-party cookies that help us analyze and understand how you use this website. These cookies will be stored in your browser only with your consent. You also have the option to opt-out of these cookies. But opting out of some of these cookies may have an effect on your browsing experience.
Necessary Always Enabled
Necessary cookies are absolutely essential for the website to function properly. These cookies ensure basic functionalities and security features of the website, anonymously.
Analytics
Analytical cookies are used to understand how visitors interact with the website. These cookies help provide information on metrics the number of visitors, bounce rate, traffic source, etc.
Save & Accept